We often think of Christian testimonies occurring in churches or a faith camp of some sort.  These are supposed to be comfortable environments in which Christian witness should be easy.  But how easy is it for you? How many of us go beyond exchanging pleasantries and socialize to spiritually nourish and encourage?  Or do we view going to church as an obligation rather than a privilege, let alone an opportunity?

It’s human nature to prefer to gloss over the messiness of life and not get into the dirty details of our daily grinds.  But if we know Jesus – the One who meets us where we are, the One who renews our strength, the One who gives us everlasting hope – then we ought to boldly testify, even in church!  Let’s look at an example from the Gospel of Luke:

“One Sabbath day as Jesus was teaching in the synagogue, he saw a woman who had been crippled by an evil spirit.  She had been bent double for eighteen years and was unable to stand up straight.  When Jesus saw her, he called her over and said, ‘Dear woman, you are healed of your sickness!’  Then he touched her, and instantly she could stand straight.  How she praised God!” – Luke 13:10-13, NLT

Like the Roman centurion (click here to read about him), we know very little about this woman.  Yet, from the little we do know of her we see a bold testimony on display.  First, we only know of this woman because she was at the same synagogue as Jesus one Sabbath day.  At this point in history synagogues were known as places that Jews (and non-Jews interested in the faith) assembled to read Scripture – now referred to as the Old Testament – to listen to an explanation of the Scripture, and to pray (cited).  As such, for this woman to be present signifies that she was intentional in her actions and, thus, had some degree of faith.

Next, we learn of her suffering for eighteen years, indicating that she boldly came to worship despite her physical circumstances.  Now, this translation also includes the word “evil” when describing the spirit that was with her.  This is likely because Jesus said she was “held in bondage by Satan” for those eighteen years (Luke 13:16).  (There are various commentaries that have differing explanations for the healing of this woman.  Some argue it was an exorcism of evil spirits that brought her health.  Some argue that ailments in general are the result of man’s sin nature and therefore, her illness was Satan’s domain, meaning Jesus physically healed her ailment rather than performed an exorcism.  As both arguments are credible, I will not choose one side over the other and detract from the focus of this post, which is the woman’s bold faith and testimony.)

When read withing the larger context, the story of Jesus healing this woman was likely included by Luke because the crux of the event demonstrated Jesus’ mercy while He disregarded the ritualistic observances of the Sabbath.  But this woman’s testimony is worth looking closely at too.  For it is more than a woman faithfully attending the synagogue despite her circumstances and it’s more than her being healed by Jesus.  This woman also boldly praised God in front of all, including the leader of the synagogue, who was not a follower of Jesus.  With the low position women held in society at that time, coupled with her low position of being disabled, and speaking in front of men, this woman lived out a bold testimony!

If this woman viewed going to the synagogue as merely a social event she probably wouldn’t have gone:

But thankfully this woman had bold faith.  What is more, she was not presumptuous so as to demand Jesus heal her.  Rather she was found faithfully listening to His teaching, which is what caught His attention; He called her to Him (Luke 13:12), and having compassion on her, He demonstrated His mercy.  Luke doesn’t attempt to detail her praise, for it was likely as magnificent as it was bold. 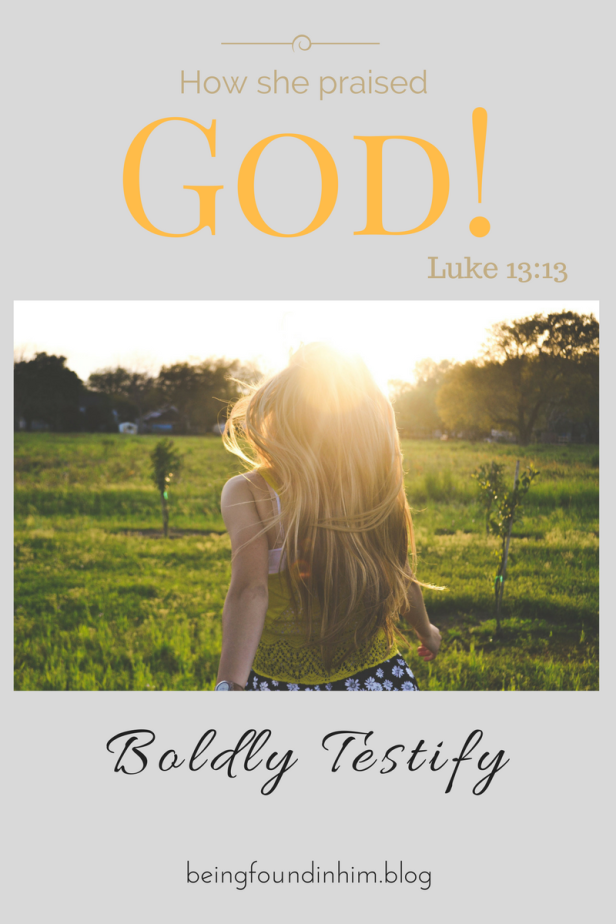 Do we go to church as a ritualistic  observance?  Do we hold on to social norms and traditions more than to the message of God’s mercy and Jesus’ gift?  How about in our conversations?  When was the last time we talked about Jesus’ saving power or God’s sovereign hand at work in our lives?

I’ll be the first to admit that speaking about faith is not always easy.  Thoughts like, How will this be received? Will I say it right? I don’t want to admit my weaknesses or short-comings pop into my mind, often preventing me from saying anything at all.  Does this happen to you?  This is not how we are taught!

“So never be ashamed to tell others about our Lord…With the strength God gives you, be ready to suffer with me for the sake of the Good News.” – 2 Timothy 1:8

I don’t want to belittle the suffering of our forefathers, but unless we live in a land where proselytizing is banned, we will likely not suffer physical harm or imprisonment for testifying in church, as Paul suggested to Timothy.  I would, however, argue that social stigma can feel just as isolating though.  But, we must rely on the power of God.  Therefore, when we feel moved to share a story – of weakness or pain or sorrow or joy and thanksgiving – we should trust the Holy Spirit is working in us, and perhaps through us, prompting us to speak, especially if prompted while in church.

We are called to be a community of believers.  To be in community means sharing life with one another.  Social events are a good thing, but not the only thing.  It is time we boldly share our faith, beginning with simple conversations with friends at church.  Share to encourage others; share to receive encouragement.

This post has been shared with the following Link-ups: 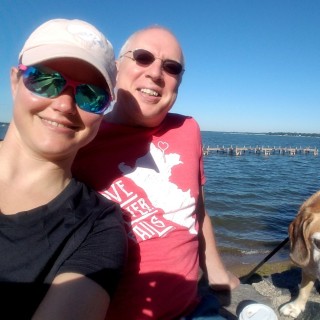